WE, THE SURVIVORS OF THE AFRICAN HOLOCAUST – THE MAAFA--,STAND FIRMLY ON THE SHOULDERS OF OUR ANCESTORS.

As African descended people, we are the survivors of the Maafa which continues to this day. We affirm and commit that preserving the legacy of the Ancestors defines our reality as well as our destiny. 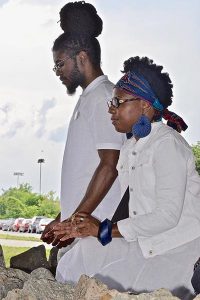 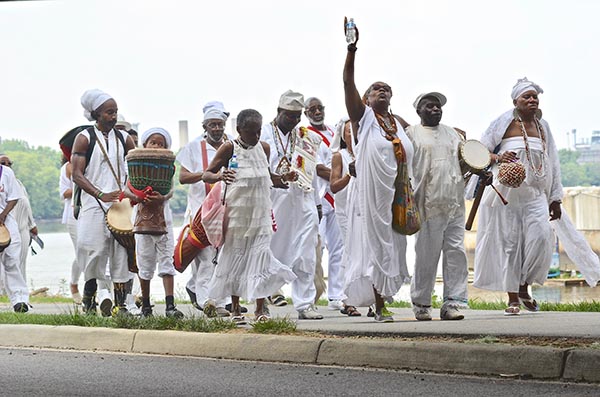 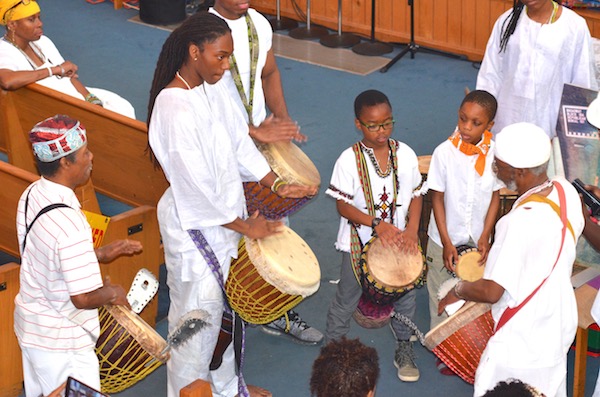 The ADACI Bronze Plaque “ Freedom’s Crossing” located on the Enlightened Building, is dedicated to our enslaved African ancestors who traversed the Navy Yard Bridge – the predecessor of the  11th Street Bridge in Anacostia, DC – from slavery in Maryland to emancipation in the District of Columbia in 1862.” 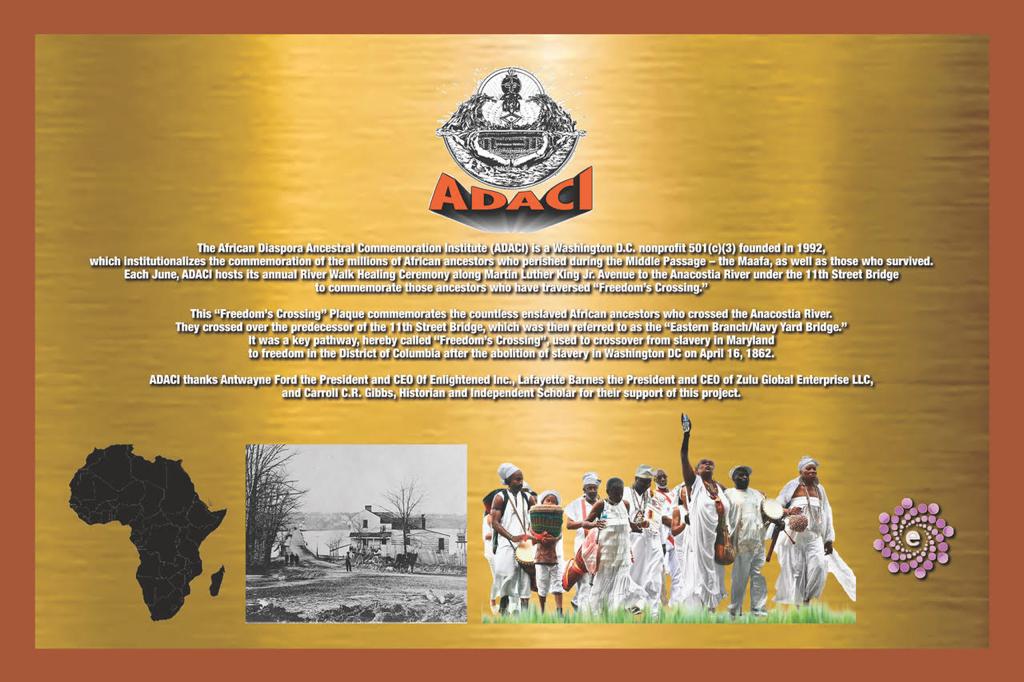 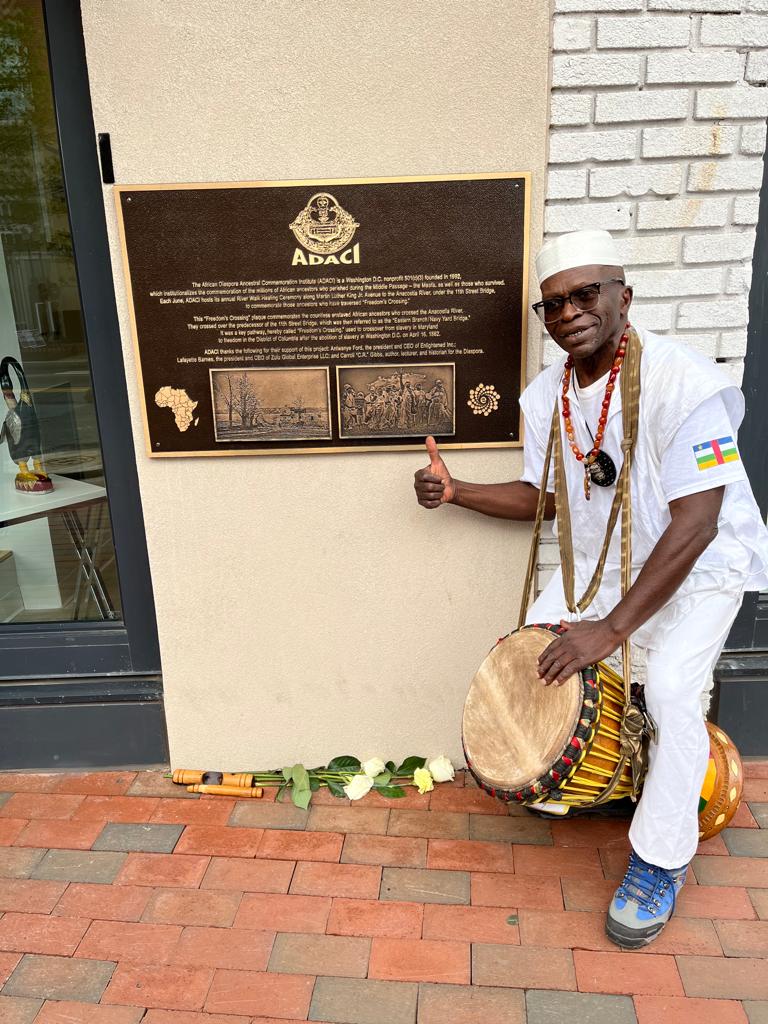 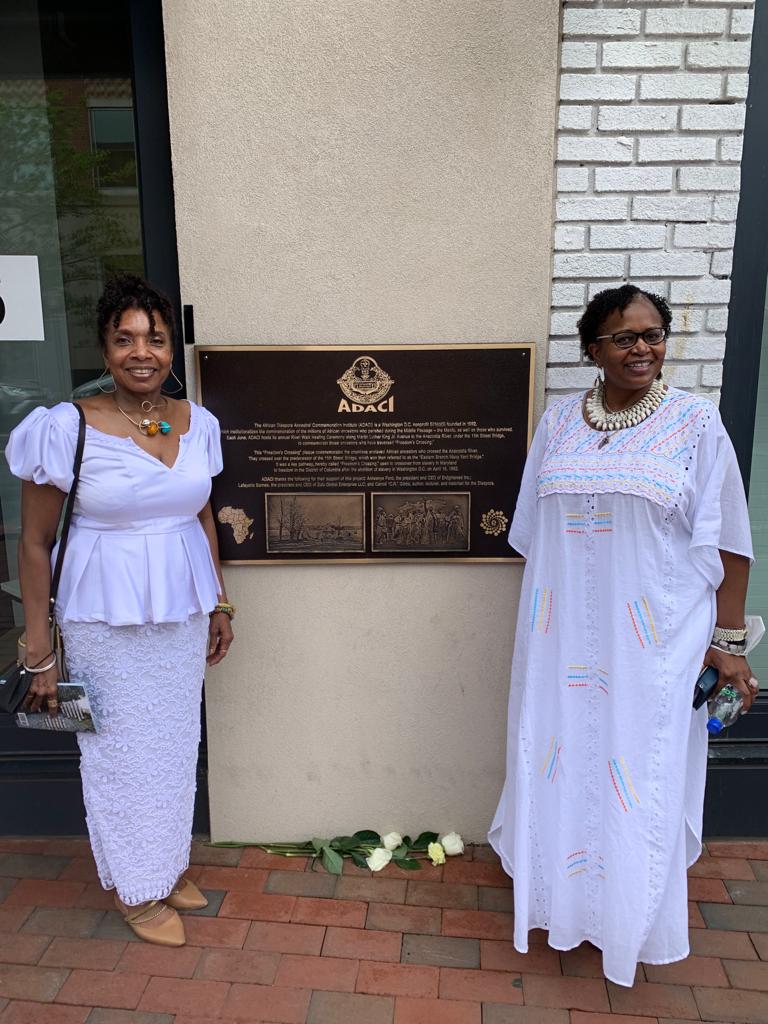 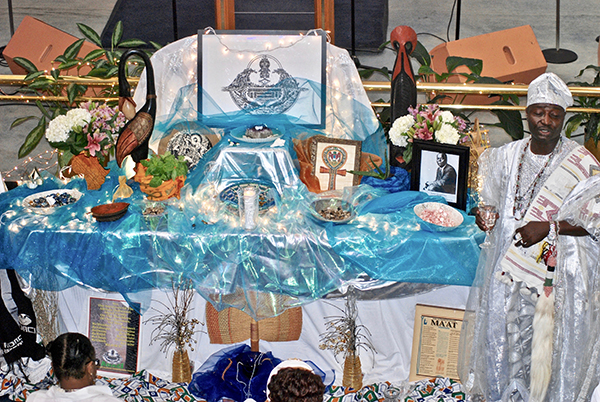 ADACI’s altars are artistic as well as spiritual creations.  The items placed on ADACI created altars are symbolic of key aspects of the African descended community and its experience and appropriate to the occasion.

Create Your Own Altar

Ceremonies performed using altars can be transformative in that they help give meaning to our daily lives by bringing us back to the Divinity within ourselves and reminding us of our connection to each other and the Divine Creator. 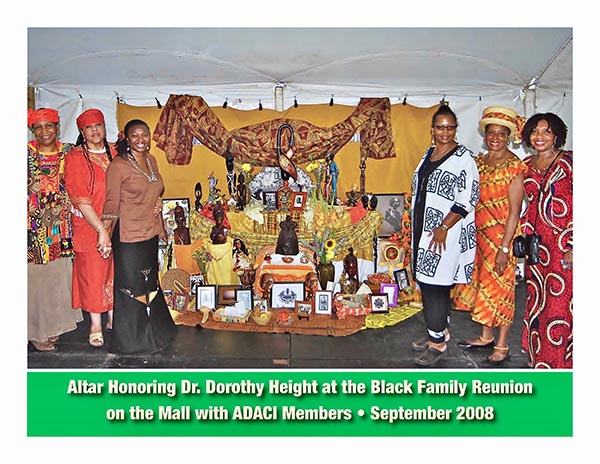 In the African tradition, the altar is a physical area where we venerate the ancestors and which serves as a focal point to express feelings and emotions within a sacred space.
Order Now 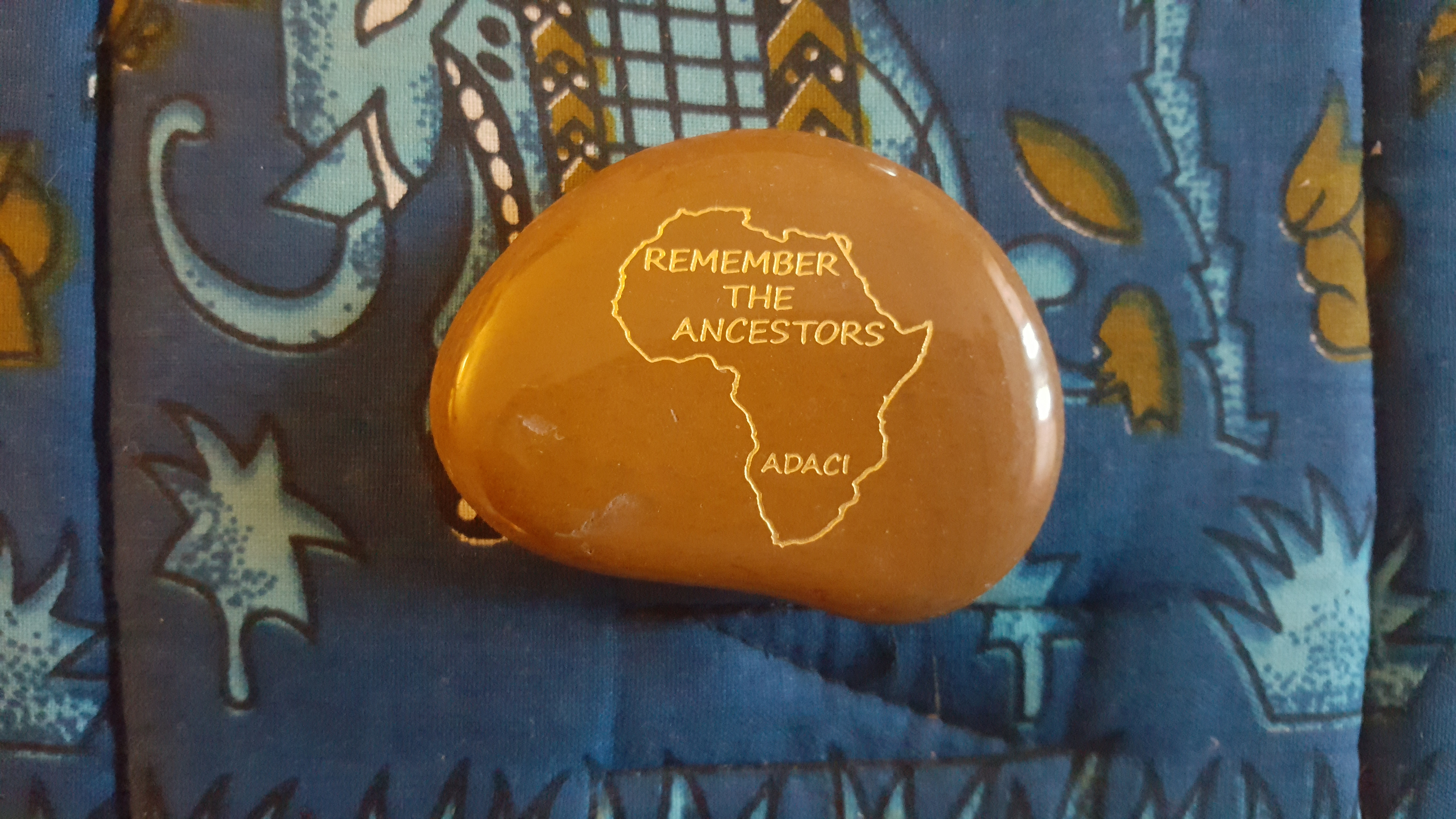 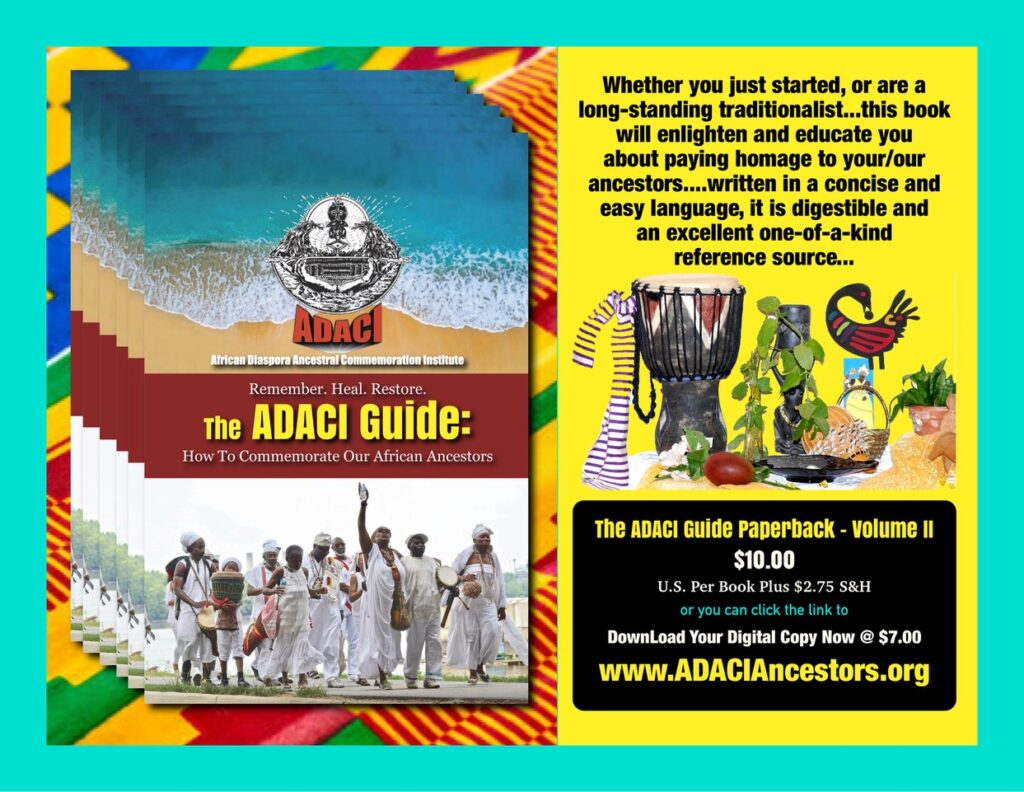 Get Inspiration for Your Commemorations, Altars, and Events

ADACI also collaborates with other organizations which share similar goals regarding matters involving cultural heritage preservation in Africa as well as throughout the diaspora. 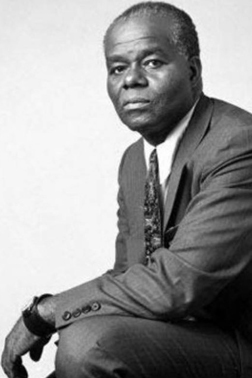 Dr. John Henrik Clarke • our beloved Principal Advisor – transitioned to the ancestors on July 16, 1998. A professor in the Department of Black and Puerto Rican Studies at Hunter College in New York City, he retired from Hunter in 1984, after 20 years of service, but continued to teach as an adjunct professor until 1987.
Born on January 1, 1915, in Union Springs, Alabama, Dr. Clarke, who never received a college degree, became the
founding president of the African Heritage Studies Association, an organization of world renowned scholars whose aim is to rescue and reconstruct the documentation of African history and culture. For over a half a century, Dr. Clarke dedicated himself to the interpretation and academic preservation of the historical and cultural legacy of African people.

A prolific writer, he was the author and editor of more than 20 books and wrote over 50 articles. Even though he had been legally blind since the mid-80’s, Dr. Clarke wrote and read daily with the aid of a computerized reading machine which was purchased by a number of friends, colleagues and former students. After acquiring the reading machine in 1990, Dr. Clarke completed seven books. His more recent publications were New Dimensions of African History, African People in World History, and Malcolm X: The Man & His Times. His most ambitious work was Africa at the Crossroads: Notes for an African World Revolution, a collection of political essays and commentary.
Dr. Clarke described himself “first and foremost” as a Nationalist and a Pan-Africanist. In the final words which he wrote before transitioning to the ancestors, Dr. Clarke declared:“my feet have felt the sands of many nations, I have drunk the water of many springs. I am old, older than the pyramids, I am older than the race that oppresses me. I will live on … I will out-live oppression. I will out-live oppressors.” “DETERMINATION” 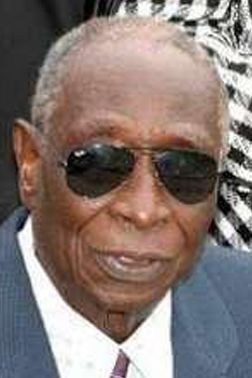 Boubacar Joseph Ndiaye • Senior Advisor to ADACI Senegal – was the Chief Curator of the House of Slaves (Maison des Esclaves) and its Door of No Return on Goree Island, Senegal. The House of Slaves is a museum and memorial dedicated to the memorialization of the final exit point of many enslaved Afri-cans from the Continent during the Atlantic Slave Trade. Largely through the work of Ndiaye, the House of Slaves was reconstructed and opened as a museum in 1962 where he was appointed curator. The Maison des Esclaves is a central part of the Goree Island UNESCO World Heritage site, named in 1978, and a major attraction for tourist, especially those descended from enslaved Africans – in particular, African Americans – who have made the Museum a focal point of pilgrimages seeking to reconnect with their African heritage. Ndiaye was born October 15, 1922 in Rufisque, Senegal into a family of Gorean origin, and completed his primary education on Goree. He continued his education at the Professional School Pinet-Laprade Dakar, and later worked as a composer-typographer until he was conscripted into the French Army in 1943, where he participated in the liberation of France with the French First Army and was awarded the Distinguished War Cross, Officer of the National Order of the Lion, and Knight of the National Order of Merit of Senegal for a distinguished military career. Mr. Ndiaye, who transitioned to the Ancestors in 2009, remains one of the most renowned Senegalese figures in the world due to his impassioned advocacy of the historical significance of Goree Island and its impact on the commodification of captured African people. 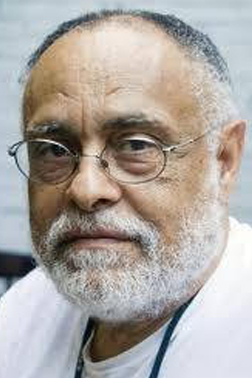 Haile Gerima • Cultural Advisor – is an independent filmmaker and professor of film at Howard University in Washington, D.C. Born and raised in Ethiopia, Gerima emigrated to the United States in 1967. Following in the footsteps of his father, a dramatist and playwright.

Gerima studied acting in Chicago before entering the UCLA School of Theater, Film and Televi0sion, where his exposure to Latin American films inspired him to mine his own cultural legacy. After completing his thesis film, Bush Mama (1975), Gerima received international acclaim with Harvest: 3000 Years (1976), an Ethiopian drama that won the Grand Prize at the Locarno film festival. After the award-winning Ashes & Embers (1982) and the documentaries Wilmington 10—U.S.A 10,000 (1978) and After Winter: Sterling Brown (1985), Gerima filmed his epic, Sankofa (1993). This formally ambitious tale of a plantation slave revolt was ignored by U.S. distributors, but Gerima tapped into African American communities, and booked sold-out screenings in independent theaters around the country. In 1996, Gerima founded the Sankofa Video and Bookstore in Washington, DC., a cultural and intellectual space that offers opportunities for self-expression, interaction, discussion and analysis through comm- unity events such asfilm screenings, book signings, scho-lar forums and artist showcases. Gerima continues to distribute and promote his own films, including his most recent festival success, Teza (2008), which won the Jury and Best Screenplay awards at the Venice Film Festival. He also lectures and conducts workshops in alternative screenwriting and directing both within the U.S. and internationally.